Linux tends to dominate as the operating system of choice on the world’s fastest supercomputers. 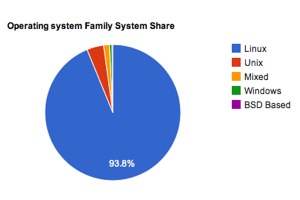 Meanwhile, only three of the world’s top supercomputers in this latest report — ranking at No. 132, 165 and 183, respectively — run Windows.

Taking the crown for the No. 1 spot in this latest list is Titan, a Cray XK7 system installed at the Oak Ridge National Laboratory by the U.S. Department of Energy. Titan achieved 17.59 petaflops on the Linpack benchmark using 261,632 of its Nvidia K20x accelerator cores.

Interestingly, Titan is also one of the most energy-efficient systems on the list, consuming a total of 8.21 megawatts and delivering 2,143 megaflops per watt.

Slipping to the No. 2 spot in this latest report, meanwhile, was Lawrence Livermore National Laboratory’s Sequoia, an IBM BlueGene/Q system that was top of the list in June. With 1,572,864 cores, Sequoia is the first system to top one million cores.

Intel in the Lead

Looking at the data in geographical terms, the United States is the leading consumer of high-performance computing (HPC) systems, with 250 of the 500 systems on the list. Asia comes next, with 124 systems, followed by Europe, with 105.

Regarding vendors, meanwhile, Intel continues to provide the processors for the largest share of the Top500, accounting for 75.8 percent of the list. A full 84 percent of the systems included use processors with six or more cores; 46 percent tap eight or more cores. A total of 62 systems on the list use accelerator/coprocessor technology.

Full details on the new report can be found on the Top500 site. To mark the 20th anniversary and the 40th edition of the list, a special poster display is being featured at the SC12 conference (Booth 1925) this week in Salt Lake City.

Click here to view more images for the chromebook

Amazon web services (AWS) launched a new service called Amazon Glacier. You can use this service for archiving mission-critical data and backups in a reliable way in an enterprise IT or for personal usage. This service cost as low as $0.01 (one US penny, one one-hundredth of a dollar) per Gigabyte, per month. You can store a lot of data in various geographically distinct facilities and verifying hardware or data integrity, irrespective of the length of your retention periods. The first thing comes to mind is, the Glacier would be a good place for a backup off family photos and videos from my local 12TB nas.

Glacier is not the backup options

Glacier is an archive product. For example, my personal home nas server is good enough to recover from various accidents. But, it will not work if entire array or all drives died. In that situation, I can retrieve my photos/videos and other data from Glacier. I’ve tons of old invoices and other business data that I need to keep for 10 years due to legal obligation and Glacier is the perfect product for me. From the amazon blog:

a) If you are part of an enterprise IT department, you can store email, corporate file shares, legal records, and business documents. The kind of stuff that you need to keep around for years or decades with little or no reason to access it.

b) If you work in digital media, you can archive your books, movies, images, music, news footage, and so forth. These assets can easily grow to tens of Petabytes and are generally accessed very infrequently.

c) If you generate and collect scientific or research data, you can store it in Glacier just in case you need to get it back later.

In short, if your house or data center has burned down and you need all your data back, you need this kind of service.

But, how durable is my data? Can I use the service for 20 years without loosing a single file?

Amazon claims that, Glacier will store your data with high durability and the service is designed to provide average annual durability of 99.999999999% per archive. Behind the scenes, Glacier performs systematic data integrity checks and heals itself as necessary with no intervention on your part. There’s plenty of redundancy and Glacier can sustain the concurrent loss of data in two facilities. From the s3 faq:

Amazon S3 is designed to provide 99.999999999% durability of objects over a given year. This durability level corresponds to an average annual expected loss of 0.000000001% of objects. For example, if you store 10,000 objects with Amazon S3, you can on average expect to incur a loss of a single object once every 10,000,000 years. In addition, Amazon S3 is designed to sustain the concurrent loss of data in two facilities.

Data or application security is one of the major headaches faced as a system Administrator. In my blog am trying to share a few points which make a server less vulnerable to a hack.

$ sqlplus dbUser/[email protected]
Here’s the  syntax for connecting to a remote database using its SID:

Once the new harddisk is connected, you can verify the connected harddisk by  issuing the below comment.
$fdisk -l

see the screenshot below. 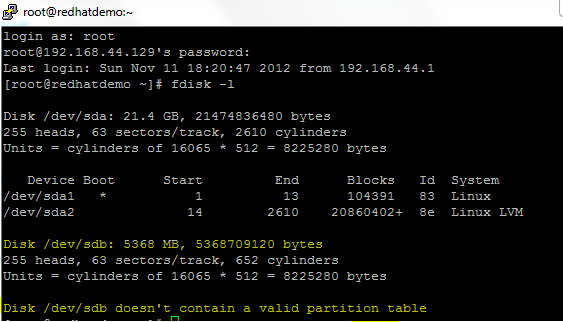 Steps for creating a new ext3 partition
1. #fdisk /dev/sdb
type “m” to see all the options available.
use “p” to print the partition table.
Now use “n” to create a new partition

it will be prompted to select

Select the partition type based on your requirement, and press enter

Then enter the partition number, default will be 1, Then press “Enter”
Enter the desired size for the partition for example, if you want to give 5GB, you can enter +5000MB.

For saving and exit the fdisk menu enter “w”

you can see the new partition “/dev/sdb1”

We can use mke2fs command to create a new ext3 filesystem, “-j” flag is used to enable journaling, even we can continue without enabling journaling.

Newly created partition can be named using the e2label command

a. create a folder under root as “/newhome”

b. add the below entry to /etc/fstab

In all flavors of Linux, we can use a utility called “lsusb” to get information on various USB devices connected.

The above command lists devices connected to the Linux kernel. See the screenshot attached below.

to get more detailed information on the devices connected to the system.

To install subversion, open a terminal and run the following command:

We’re going to create the subversion repository in /svn, although you should choose a location that has a good amount of space.

Next we’ll need to edit the configuration file for the subversion webdav module. You can use a different editor if you’d like.

The Location element in the configuration file dictates the root directory where subversion will be acessible from, for instance: https://www.technix.in/svn

# Uncomment this to enable the repository,
DAV svn

The SVNPath line should be set to the same place your created the repository with the svnadmin command.

# Set this to the path to your repository
SVNPath /svn

The next section will let you turn on authentication. This is just basic authentication, so don’t consider it extremely secure. The password file will be located where the AuthUserFile setting sets it to…  probably best to leave it at the default.

To create a user on the repository use, the following command:

Note that you should only use the -c option the FIRST time that you create a user. After that you will only want to use the -m option, which specifies MD5 encryption of the password, but doesn’t recreate the file.

Now if you go in your browser to http://www.server.com/svn, you should see that the repository is enabled for anonymous read access, but commit access will require a username.

If you want to force all users to authenticate even for read access, add the following line right below the AuthUserFile line from above. Restart apache after changing this line.

Now if you refresh your browser, you’ll be prompted for your credentials: