I just want to share my experience in performance issues that occurred due to Java heap memory.
Before that a few points to recollect about Java memory.
Heap memory is where java run time objects are getting allocated.
Non-Heap is the place of loaded classes and other meta data.

1) What will be the impact of loaded java heap memory?

END_OF_DOCUMENT_TOKEN_TO_BE_REPLACED

Wine 1.6 was officially released, wine 1.6 release comes just one year after the previous release of wine 1.4. The current release of 1.6 release has about 10,000 individual changes.

Among the wine 1.6  highlights are OpenGL DIB support, RandR 1.2/1.3 support, the Mac driver for not having to rely upon X11, Direct3D off-screen rendering, early 64-bit ARM support, dynamic device support, a Direct3D shader compiler, multi-channel ALSA audio handling, and thousands of other changes.

The source is available from the following locations:

Binary packages for various distributions will be available from:

You can also get the current source directly from the git
repository. Check http://www.winehq.org/git for details.

Features below, taken from http://www.winehq.org/announce/1.6

To check the version of Safari installed on iPad, then launch the Safari browser and  navigate to address bar and type “javascript:alert(navigator.userAgent)”. Press enter after entering this command.

This would display the following popup with Safari version along with other details. 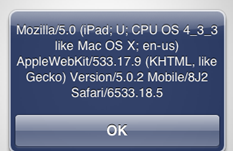